4x4, also known as 4-Wheel Drive (4WD) or All-Wheel Drive (AWD), on a car is where the engine sends power to all four wheels instead of just two. Typically, a car engine only powers two wheels - either Front-Wheel Drive (FWD) or Rear-Wheel Drive (RWD).

4x4 systems are normally added to larger vehicles with all-terrain abilities such as trucks, off-road vehicles and SUVs.

Not every 4x4 system is the same. If your car has 4WD, you should find out what type it is to understand how it works.

As the name suggests, selectable 4WD has to be manually switched on when you're on a slippery or rough surface and need some extra traction to keep moving. Usually the car will have a specific dial or lever that you need to engage.

Don't forget to switch it off when you're back on a normal road surface because it's not designed to be used on tarmac and only works at slow speeds.

Although you don't have to worry about turning your 4WD on and off, it's the least efficient type of 4x4 system because it's always on. However, most permanent 4WD systems have the option of part time operation so you can switch to 2WD.

Sometimes referred to as 'Intelligent 4WD', this system maximises the car's grip and performance as well as fuel efficiency by continuously altering the amount of power going to each wheel based on the road surface.

This is the most common type of 4x4 system. In normal driving conditions, most of the power will be directed to either the front or rear wheels for optimum fuel efficiency.

Advantages Of Driving A 4x4 Car

The main benefits of having 4WD are traction and power which are particularly helpful in certain situations.

The key attributes that every good towcar needs are weight and power. The heavier the tow vehicle is, the more stable it's likely to be when it's pulling a trailer or caravan. In order to get that additional weight moving, a powerful engine is imperative.

Despite having a powerful engine, your car's tyres might lose grip or squeal if the power is only being sent to the front or rear. By distributing the power to all four wheels, it's easier to get a heavy car and trailer combination moving.

4WD improves traction in difficult driving conditions such as snow, ice and mud making it easier to start moving and stay in control on slippery surfaces.

In addition, you're less likely to get stuck driving a 4x4 car because the engine's power is constantly being distributed between all four wheels. If any of the tyres start spinning, the other wheels that have got grip will continue to pull the car forward. 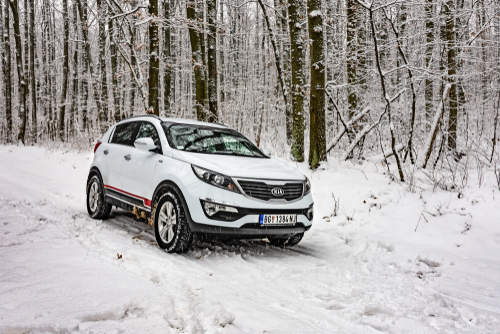 If you love driving off-road, having a 4WD car is essential. The extra grip the car receives by providing all four wheels with power is necessary when you're climbing over rocks and similar terrains.

Going off the beaten track also means driving on uneven road surfaces to the point where only one wheel is touching the ground - you don't want to be stuck with a 2WD car in that situation.

The easiest way to check without any technical knowledge is to consult your owner's manual. The technical specification should say whether your car has 4WD or not. Similarly, you can enter the exact specification of your car into Google and it should return a helpful result.

However, if you want to see what type of drivetrain your car has (FWD, RWD or 4WD), you'll need to get under it. A 4x4 system has an axle shaft which is a large bar going from the front axle to the rear axle. If your car has one of these, you have 4WD.

What's The Difference Between A 4x4 & An SUV?

Although 4x4 is a type of drivetrain for a car, it's also become synonymous for a class of vehicle. Traditionally, they use a rugged chassis frame with the bodywork on top which was bolted in place.

The most famous example of a '4x4' is the Land Rover Defender which is revered for its tough exterior and ability to handle anything.

SUVs (Sports Utility Vehicle) are the new, sophisticated breed of 4x4s. They're lighter, more luxurious and have lower running costs than traditional 4x4s.

Although they're not in the 4x4 class, many SUVs are 4x4s because their engines' distribute power to all four wheels making them very capable of driving off-road.

Have a question for us?